Back in April, I put up some ideas about travelling with a camera.  I’m just back from a road trip where I lugged around both my digital SLR, a small Lumix and a middle-of-the-range HD handycam.  What have I learned?

The Lumix was recommended by a chap at work who takes great shots when he’s on the road.  My attempts while pretending the car had stalled were a worry but, before I could get too disappointed, I realised the blue tinge was caused by the windscreen.  He has the advantage of not having a car windscreen.  Thanks to “Auto Colour Correction”, all is not lost.

The likelihood of pulling out the big digital for this giggle …?  Not very.  Yet, it was a memorable moment that I thought deserved its spot in the trip book.

The lesson from this first excursion with the Lumix is to keep it handy.  The aim is to record those images that will become the narrative structure of the trip book, the points that move the plot forward, for which the DSLR is often too clumsy.

The Handycam sat comfortably on the up-turned palm of my hand while I wandered around.  I rarely looked at the display.  Hand-held video is a bit rough, and there will be plenty of editing to remove the sections of little value.  However, I’m able to pull some useful HD stills that I can also include in the trip book.  The aim is to select images that represent the essence of a place, like these magnificent trees at Beechworth’s Victoria Park. 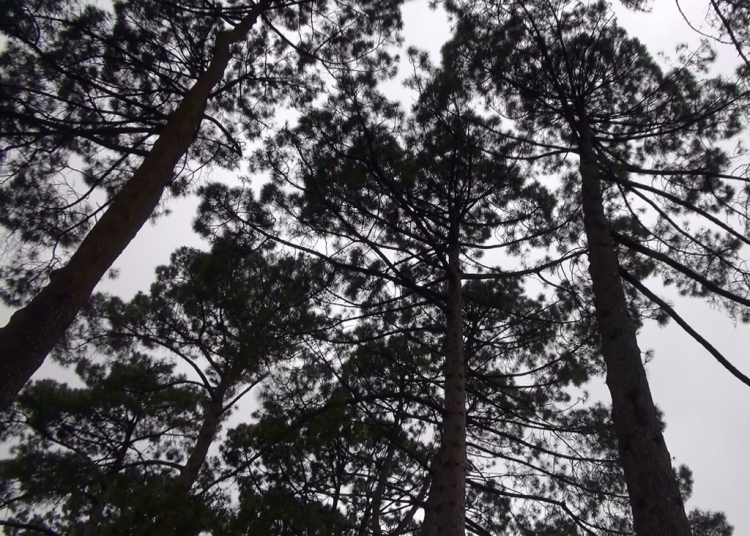 The lesson from this first attempt is to stand still a little more often.  It might be high definition, but movement is movement.

Reviewing the video, I’m finding interesting frames that force a different perspective.  It’s still early days for me with this style of image capture.  I’m looking forward to exploring this further.

To get the best out of the big digital, I have to stop and pause and reposition my thinking.  Or perhaps I have to stop thinking!  There were a couple of places where I collected a number of photos as a way of visually digging into the experience.  The series of photos that made up the Upper Deck post is one example.

A personal favourite is this handrail from the lookout tower at Maldon.

Thinking back, the times I went on a visual dig with the camera were also the times when I completely ignored my travelling companion.  Sorry, Mum.

In sum, this was my first trip travelling with two digital cameras and a handycam.  I’ll do it again.  The Lumix quickly grabs those events that just can’t justify pulling out the DSLR.  The DSLR is there when something proves so visually interesting I want to harness the big digital’s technical capacity to explore the detail.  The handycam is just plain fun and doesn’t get in the way.

The downside … you need a week or two off work after the holiday just to process it all.