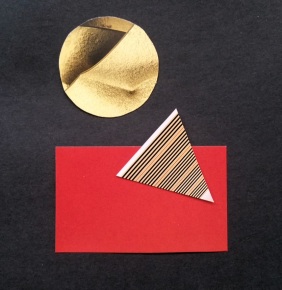 It’s a juxtaposition worth noting. I’m reading a book about precision while working on a creative project involving imprecise geometric shapes. The shapes are drawn with worn templates and then cut quickly by hand. There’s no attempt to make them exact.

The project has been going for seven months. I’ve noted this juxtaposition now because I’ve hit that mid-way point where motivation sags. The imprecise is becoming more imprecise.

So I browsed the internet for information about mid-project blues and found it really is a thing. That might explain why I recently missed two weekends in a row.

The idea was to quickly create a small collage each weekend;  ‘quickly’ because there’s plenty of other things to do. Once happy with the result, I’d take a photo with my phone and post to Facebook. Making it public by posting it encourages discipline.

The aim was to carve out some time for essential creative play; ‘essential’ because creative play nourishes well-being and exercises the brain.

Previous posts on the topic

When I started this project on January One, the big question was whether I’d manage to complete a collage every weekend for an entire year of weekends!

These small works aren’t intended to be grand statements about anything. So why the discouraging attitude?

On reflection – cause we need to do that before giving up – the decline started when I added more pieces to the stockpile. At the beginning, I was cutting from glossy magazines. Then I started buying non-glossies. The process of making hadn’t lost its thrill, but the matt finish of the paper didn’t photograph well. The photo was a letdown.

On reflection, there had been an earlier transition that I’d successfully managed. The collages that embraced the grid didn’t necessarily ring true in the photo. The camera phone added distortion (it’s frightfully difficult to keep it square horizontally and vertically when photographing a flat plane) and as a result added even more imprecision. I abandoned the grid.

I’m not going to abandon the matt finish paper or the photograph posted to Facebook. Instead, I’m going to acknowledge that this project ‘Is What It Is’ and get on with it. This is one of those situations where the end product is not the goal. Instead, it really is about the journey.

There have been other lessons. Don’t crop the photo too hard as that disrupts the balance. The full background of the A5 card is part of the view when I’m arranging the pieces and it’s taken into account. Removing it in the photo risks another letdown.

Do I glue this piece or will I find a better option? I’ve just worked out that I can cut away anything I no longer want. It doesn’t matter if I’ve applied the glue too soon! (I’m not sure if that’s a particularly favourable life lesson – where’s the resilience?)

A sense of movement is particularly appealing.

On to next weekend. Can I find a way to mix it up a bit?

Creativity must not be allowed to stagnate.

What will you try?