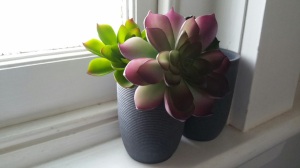 “Indoor Plants Are Back” declared the magazine cover. It’s not very often I’m on trend.

It’s Doctor Who’s fault. I’m not old enough to be an original fan, only coming on board for Doctor No. 2, which made me just the right age to be scared off indoor plants for life by the Krynoid. These plants were only stopped by a huge explosion that destroyed them and the mansion they’d overrun. That night, Mum had to close my bedroom window when the rose bush outside rustled against it.

But, surprisingly, thankfully, an addiction to indoor green developed after spending a few too many months with an indoor-plant loving sister. When the need to garden is important, to make things nice, solutions will emerge.

The collection grows. They are small sculptures, ever changing. Creatively stimulating.

I was asked whether I was enjoying my move to a small(ish) country town. It was, I think, an attempt to start a conversation that didn’t go as planned. I was honest.

Not all country towns have retained their country town charm. There are, I think, optimum sizes. The larger towns will have the financial base to invest in how the town presents itself to residents and visitors alike. The smaller ones may have missed out on modernisation and are primed now for a tourist market.

However, regardless of size, competing with an inland capital city will be difficult. “I miss Canberra; it’s a beautiful city”, was my conversation-killing reply.

She raised the question again last week, wondering if time had helped … how was I settling in? I replied affirmatively, but mentioned only this new-found interest in indoor plants.

When I see her again, I’ll have a thoughtful answer:

Have you heard of the concept, ‘borrowed landscape’? It’s used when discussing garden design to describe the usefulness of distant trees that don’t belong to us.

Turns out, that’s what I was doing in Canberra. Not just borrowing the trees, but borrowing an entire aesthetic. It didn’t matter that my own home was a bit daggy and uncoordinated. There was enough beauty outside, and I borrowed, daily, constantly, lazily.

Now living in a small country town that cannot possibly compete with a national capital, I have no choice but to stop being so lazy and take some responsibility.

The indoor plants are a start, but on a very limited scale. When the town is the wrong size, then it is up to individuals and the community to do their collective bit.

That got me thinking. Two views of my rental are currently borrowed by others (aside from the obvious front yard!). One is the view through the back gate, and the other is along the side fence. The first will take some time, and is only seen by a few. The second is seen from the street and potentially quicker to tackle. Given that I’m borrowing from my neighbour’s beautiful garden whenever I look out my window, I should be making a similar contribution to their point of view.

Mmm? Better be careful not to bite off more than I can chew.