Today, let me introduce you to Whirlwind.

There are times when the traditional methods of prioritisation don’t help. Time spent reviewing the growing to-do list could be instead spent crossing things off. And I say that in spite of a recent article suggesting people who need to finish something, anything, in order to feel productive are actually less productive. Well, of course we are, if you insist on being clinical about it.

Life is a balancing act, a tight rope walk, a tug of war between our analytical and emotional reasoning.

A Whirlwind day IS emotionally motivated. It’s about clearing a psychological bottleneck that’s been jammed with items, often uninvited and unwanted, that block the view.

I’ve written about my Kanban and Shuffle Day strategies – or perhaps temporary states of existence is a better descriptor. They are the new kids on the block, with Kanban being the baby of two and suggesting his oldest sister, Whirlwind, is quite unnecessary if only he was implemented correctly.

The idea for Whirlwind started a few years ago when I placed another piece of paper onto a pile of pieces of paper. A strategy was needed.

Where a Shuffle Day is about going wherever visual and verbal cues trigger an inclination, Whirlwind is about picking a spot and systemically tackling each and every thing that’s there. Where Shuffle Day was a name eventually applied to an existing habit, Whirlwind was a deliberate creation because the habit wasn’t helping.

In both, however, there is a size limit: no building a new vegetable garden, or writing a novel, or cleaning out the gutters. This is about actions, not projects.

Take last Saturday as an example. A Whirlwind was declared and the spare room was targetted. I’d previously unpacked linen, towels, blankets and assorted fabric things and left a mess … not huge, but untidy and in the way. The Whirlwind aim was to pack away everything there that I didn’t need in this house this summer.

Bonus: Finding lengths of fabric previously used as curtains three houses ago, which now hang on the enclosed verandah as protection from the afternoon sun. They are up and contributing nicely.

Baffling: Why do the packing cases still look full after I have supposedly unpacked? 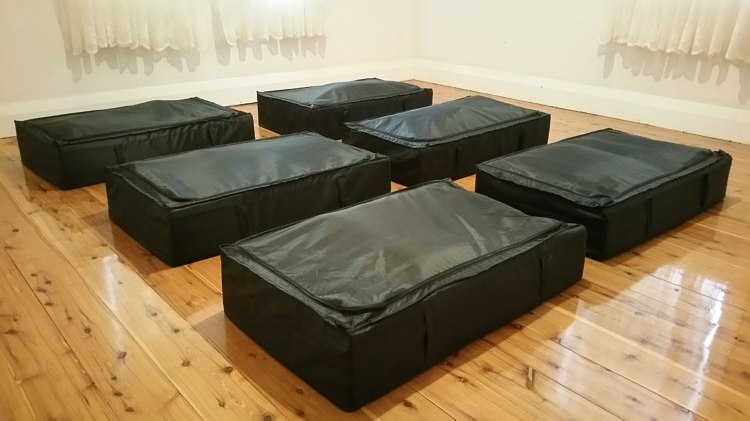