In a photo challenge titled New Horizon, there are bound to be lots of photos of the horizon – beautifully evocative photos that speak of hope or desire.

The important point is that it will be different depending on where you stand. Take one step forward (or back) and you are looking at a new horizon. It just doesn’t look particularly different.

Can the idea of a new horizon be depicted another way?

Setting goals involves deciding upon a desired outcome and then working out the pathway that will get us there within the allocated time. There are many well-worn methods for achievement. Singularity of focus is a key feature often touted in the self-help books.

When rummaging around for an image for Daily Press’ weekly photo challenge, I decided to manipulate one in Photoshop. Isn’t that what our goals are – a way of manipulating what happens to us?

This photo started in the old buggy shed at Iandra homestead, in central west NSW. We couldn’t enter the building, just stand in the door way and wonder at the mysterious contents. I raised my camera and randomly took some shots while panning from one side of the room to the other. In the limited light, the exposure time was long enough to create some interesting sweeps of colour.

The manipulation involved copying and flipping one of the images, then pasting the two side by side.

This, to me, represents the path to achievement – the goal, the passage through the obstacles, the single-minded direction.

But it’s boring … often necessary, but a bit boring.

Instead, this is much more fun. It’s the difference between achievement and experience. 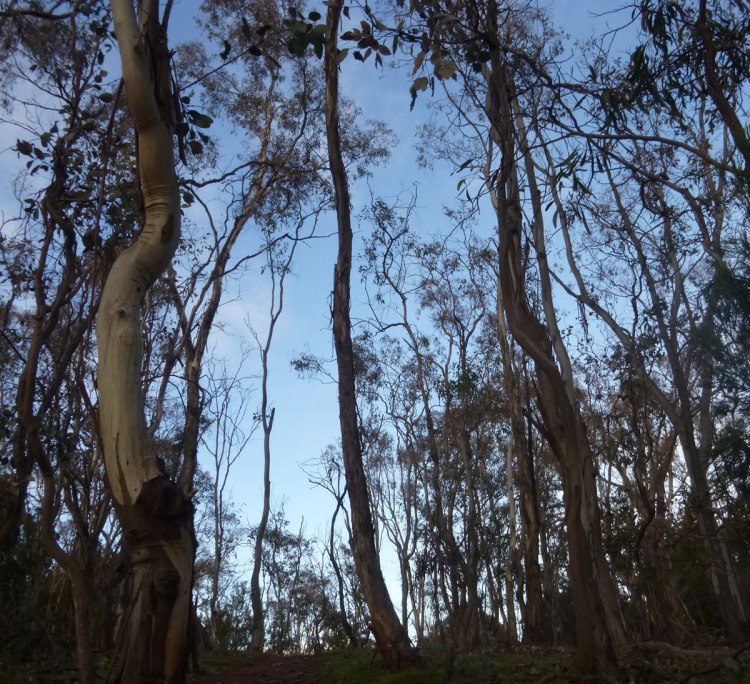 It had been raining for a week or more. The weather bureau scheduled some sunshine for Saturday, and I wasn’t going to miss the opportunity to get outside. I’d been feeling very hemmed in.

On the day, the scheduled sunshine was looking dubious. A mist hung around for most of the morning. I dressed accordingly and headed out. It was cold. I was not going to put this off any longer.

I didn’t want to go far, so headed to a nearby trail that I hadn’t tried yet. Forgot to take the map, but didn’t need it. The aim was simple – get back to the car when I’m ready to leave.

It was a delightful stretch of bush land with various options. There were some open spaces, but generally the track was surrounded by these tall skinny trees. It did nothing to relieve me of my sense of being contained. At one point, my path was blocked by a mob of kangaroos that I decided to avoid. Getting back to the car involved walking in a large circle, and there I am – back at where I started.

Did you think this was going to be a story about release and escape?

This photo, with it’s low and almost inconsequential horizon, sums it up. The path is there, if you look hard enough. It was a valuable and very memorable experience.

Progress and direction have their necessary place, but lets not forget how important are the experiences we have along the way. They will make the lasting impressions.