I said I wouldn’t do it. I didn’t expect to enjoy it as much as I did.

These colouring books are everywhere. My local newsagent got in on the action and now I can’t even buy a lottery ticket without them in my face.

Then, out of the blue, I grabbed one on the way to the counter. It said “Art Therapy for Seniors”. Which word made the sale … “ART” … “THERAPY” … or “SENIORS” ?

The plan, quickly formed, was to spend 10 minutes or so after turning off the TV and before turning off the night light. 10 minutes became 15, became “just till I’ve finished this section”.  It currently sits at half an hour. Some nights, towards the end of the working week, have crept up to the hour mark. 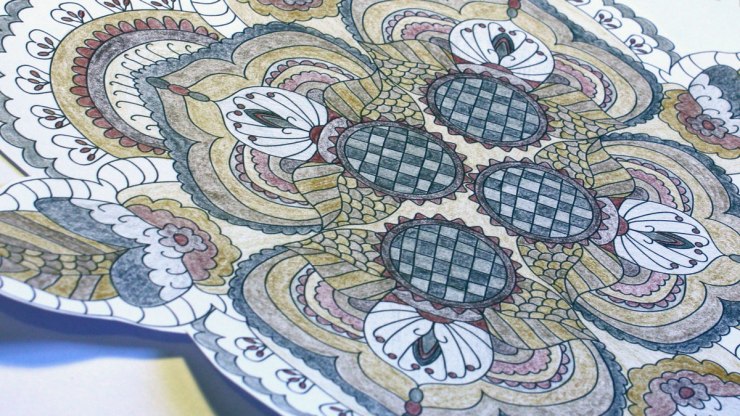 I’m happy to accept that colouring books are not technically art therapy.  In an ABC article last August, Jo Kelly, president the Australian and New Zealand Arts Therapy Association (ANZATA), said so. Making our own design will probably have a greater impact IF we are trying to work through something, improve our self-awareness or cope with a society that insists in equal measure that we must toe the line AND think outside the box.

It might not be therapy but it feels therapeutic. The action of colouring switches off the patterns and expectations we own as adults. It’s actually restful to choose my own colours and only colour between the lines.

What’s it doing for my creativity?

There is claim and counter-claim on the internet for the role of colouring books in developing creativity. On a personal note, I haven’t noticed any significant impact.

How much problem solving is involved? Not much given only three decisions are involved: Which page to rip from the book; which four to six colours to select from the pencil box; and how the play of light and dark might work in this particular pattern. That last one can get a little interesting, but not much.

Are there any unexpected encounters? Definitely not once those initial selections are made. And I select only pencils from the same colour family. The aim is to sooth. I avoid mixing reds and greens, and purples and yellows, because it’s just not restful.

Perhaps I am laying down pathways to particular colour combinations that I will recall at some point when needed. It’s too early to tell.

So why am I hooked?

The meditation is making a difference.  Have you met someone who doesn’t like walking unless there’s a destination? Well, I’m not much for meditation that involves doing nothing.

It takes a couple of weeks. Until then, those stray thoughts will pop up relentlessly, out of habit … so let them in, let them go, focus back on the action of the pencil and the mark it is making.

Now, even when I put the book to one side and crawl into bed, I recall the motion of the pencil as a way of setting aside any remaining disruptive thoughts.