Finally, a resolution to a question I asked in 2012. Back then, I stood beside the bridge that crossed the Lachlan River and snapped a photo, wondering what I would see from this point when the new bridge was finished.

Turns out, it’s an ugly view, particularly when compared with the original photo.  But even without that comparison, the site looks very sad.

Back to the beginning

It started on the drive home for Christmas in 2012. Since then, I’ve been snapping photos as I pass the building site for the new bridge over the Lachlan River at Gooloogong.

Except for that time when I was told to move on because I was supposedly parked illegally. I told the non-policeman that I had checked for signage and found none, and could see that the bridge was now finished and there was no industrial equipment within cooee, so thought it OK to stop in a spot where I could pull right off the road so would not be a hindrance to passing traffic. But I didn’t press the point, so no photos that day. 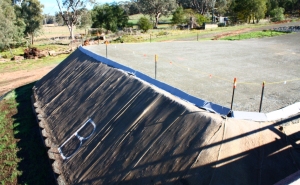 The ramps on either side of the river were being built.

The brightly coloured cranes had moved in.

No way to get close, so had to be creative.