Most jigsaws have patterns of colour from edge to edge.  This one seemed to have more activity than most.  It was full of mythical folk, with centre stage occupied by one with a golden axe about to strike open a large hazelnut.  One little old chap, sitting closely nearby, looked decidedly worried.

Visually, it seemed so busy that it should be easy enough to reassemble.

In truth, it was harder than expected.  So much detail.  Thankfully, there were many long-stemmed reeds and rushes across the picture plane.  These created many distinctive lines that helped orientate the piece (the light was from the left) and then position the piece within the larger frame.

It managed to be both dark and delightful.  Little faces popped up everywhere. 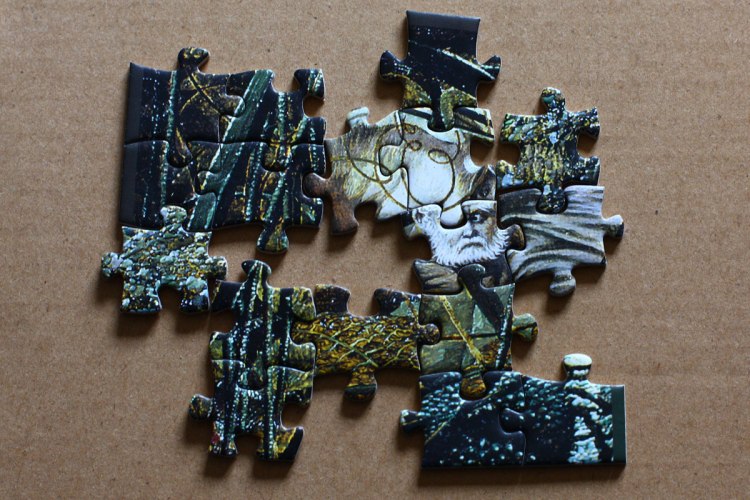 In this photographic series, the aim is to distill something of the experience of the puzzle I’ve just completed, before it goes back in the box.  I select a number of pieces and re-assemble them.   There is no rule that the fun should stop when the last piece is placed.  This was my second attempt.  The first was photographed against a wood panel background which I very quickly disliked.  So I tried again.

This is a Pomegranate puzzle of Richard Dadd’s “The Fairy Feller’s Master-Stroke”.  I mis-read the title and, until now, have spent the last few months wondering which character was the Story Teller.

Hopefully, my eye for detail improved as a result of grappling with this tiny world.