The habit of ensuring a sufficient on-hand supply of cold/flu and hayfever tablets at the beginning of each season is well established.  The habit of reviewing use-by dates on the bottles and packaging of the rarely used … oh dear.

Just how many worthless items did I have?  An embarrassing five bottles, seven packets, two tubes of cream and seven loose trays of assorted pills.

It was the morning after the night before.  No, I wasn’t looking for a hangover cure.  I was checking the bottle of laxatives to work out what went wrong.  They were six months out of date.  It would be another 24 hours of discomfort during which I would try to focus on work, buy a fresh bottle during my lunch break, swallow a couple before bedtime and sleep in hope that tomorrow would be better day.

In this, my Year of Liveability, I’m reinvigorating areas of my life that stagnated during those four years where I combined work and study.  There just wasn’t time to do everything.

One of the key criteria I’m using is Worth, and I’m expecting piles of worthless stuff and worthless habits to be given their marching orders over the months to come. 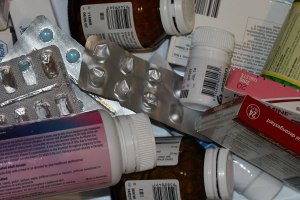 Reflecting on the pile of out-of-date medicines, I’ve decided there is no excuse for buying vitamins and then not using them.

However, when all that’s needed is a couple of pills or a glob of cream once or twice a year, even the smallest package is still excessive.  And it’s illegal to share many of them.

Add to this the obligated doctor when a prescription is the standard operating procedure for our set of symptoms.  Even if we say no, they have to write one or there is the risk we will officially criticise them later.  Once we’ve got the script, even though we didn’t want it, there’s this nagging feeling we should fill it … just in case we change our mind in the middle of the night.  And it’s illegal to pass them on to someone else.

Or does this only happen to me?

The next step is to put these in a bag and take them to the chemist for disposal.  This is called the RUM Project.  It’s a national program in Australia for the safe disposal of unused and out of date medicines that aims to prevent accidental poisoning, medication misuse and toxic releases into the environment.  Check out their website at http://www.returnmed.com.au/

What’s the oldest date in your medicine cabinet?