I don’t know who Tim was, or is, or why someone wanted him to go faster.

This is the next instalment in my Road’s Edge series.  These photos were taken on Apollo Road in Namadgi National Park on a recent field trip. 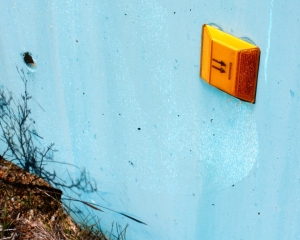 Just a few paces down the road, while walking back to the car, I turned and noticed a pattern of shadows from the trees behind me.  At eye level, the tops of the trees lined up nicely with ridges on the rock wall.  It probably wouldn’t mean much to me elsewhere, but in a national park it tapped into the delicate balancing act between conservation and access.

In contrast to the concrete barriers protecting visitors from the forces of nature, there was this scene of nature symbolically overshadowing our path of access.

The Road’s Edge rules are simple. Stand on one side of the road and point the camera directly across to the other side. The edge of the road must run along the edge of the image. I wasn’t looking for panoramic shots that overpowered the presence of the road. It’s presence is conceptually significant, even though it might only occupy a small proportion of the foreground.

I was standing on the edge of a country road one day, a few years ago, and realised that this spot is a symbolic point between two worlds. A myriad of topics reside in these places of transition, these places of boundary.

To the next edge …