My 2014 Sydney Festival was brief but intriguing.  Mum and I were wandering the streets while Dad rested up in the motel after some day surgery.  We didn’t abandon him, not really.  He was sitting in front of a big screen TV, with a glass of beer, watching what was left of the Australian Open tennis after most courts had been vacated because of the extreme heat.

When the Opera House sails appeared above the tree line ….

We turned around and eventually arrived at the festival entrance. 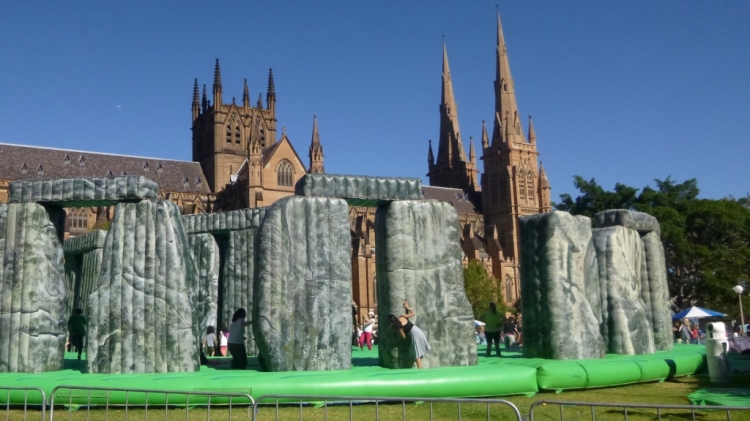 It was the plastic that attracted this photographer’s eye because of its placement.  Stonehenge sits across the road from St Mary’s cathedral.  A host of visual and conceptual contrasts to identify.  Not just for kids.

The queue was too long in the summer sun, so we didn’t bother with an inside view.

Sighting the tips of the Opera House reminded Mum that she hadn’t really seen it up close.  So after dinner, we headed down there.

Again with the plastic and a significant Sydney landmark.  This time, no queue but we were 10 minutes too late.  It had closed.  It was described as “Exxopolis, a giant inflatable city like sculpture made up of a labyrinth of tunnels and inspiring spacious domes”.

It’s not technically a part of the festival (ie, it’s not on the Sydney Festival website), so perhaps the similarities were co-incidental rather than a consider contribution to a curatorial theme?

Love a bit of serendipity.