There are two types of people in Melbourne – Tourists and Non-Tourists – and it’s not hard to tell the difference.

Distance travelled:  Who knows, but our feet hurt.  Mid-afternoon, Mum changed into her comfy bedsocks and old gardening Crocs in order to put a bit of cushioning under her feet.  I was stuck with my hiking shoes, but some extra thick socks did help.

Weather:  No rain!  Cloudy, windy and then about 5pm we see the sun for the first time in days.

The day started without coffee and, as a result, I bought the expensive sightseeing bus tour, rather than the $5 one.  I’m trying to ask the lady at the Information Office where to buy the ticket and where we catch the bus, but she sends me to the wrong counter and wrong bus stop.  It was my lack of caffeine.  She knew she was telling me about the $5 bus.  I thought she was telling me about the one on the brochure in my hand.

A take-away flat white later and the world starts to fall into place.

During the bus tour, we temporarily delighted in the brisk wind of the open upper deck until we hit Docklands when the wind was coming directly off the Southern Ocean. Thankfully, we had packed a few warm pieces. The upper deck has no windows, which we both appreciated. It is novel to see things up close and not behind glass. The low hanging trees lining the streets were occasionally startling. 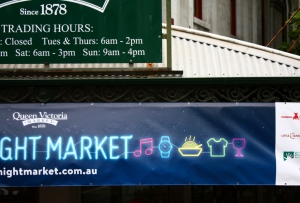 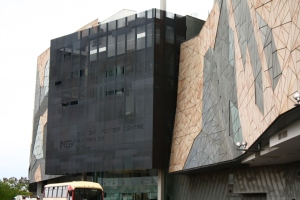 After the bus tour, it was off to the National Gallery Victoria for a dose of Australian art.  Lots of great pieces, plus the great one I desperately wanted to see – Tom Robert’s Shearing the Rams.  The photo, of course, will not do it justice (and not included here for copyright reasons, plus the fact that Mum is in shot and has veto rights).  A tapestry version has lived above Gran’s old piano since the mid-80s.  This was an opportunity to see the original.

Across the road, we found the graffiti laneways for which Melbourne is so famous.  Mum can spot a skein of wool from a mile off and found this delight amoung the acrylic paint.

By now, it was too late for the Queen Victoria Markets.  Turns out, they close at 2pm on Thursdays.  We’ll have to get there tomorrow morning.  Instead, I sat in a back pew while Mum wandered around St Paul’s Cathedral.  I suddenly felt like I was in a TV documentary, like that Simon Reeve one on Pilgrimage that’s been screened recently.  How interesting the way TV frames and prepares our experiences for us!

Exhausted, we returned to the hotel for a nap.  I’ve spent more time on the video camera and just haven’t been grabbing the still shots I would have in the past.  This is a video frame from one of our many trips across one of the many bridges across the Yarra.

Next, it was off to next door to the Eureka Skydeck with the aim of walking out on the Edge.  Turns out, we didn’t have to walk out ourselves.  The glass-bottomed viewing platform sits inside the building until it propels itself out.  Photo equipment not allowed because they want you to pay for the privilege of a souvenir; which we did.  It’s not as a scary as it seemed.  After walking around the Skydeck while waiting for our turn on the Edge, we became accustomed to the height.  Looking down, the metal-edged glass panels are no bigger than an average TV screen.  Just imagine you are back in your own living room.

We were allowed to take photos from inside the Skydeck.

Mum says it is time to work out the way out, ready for tomorrow.  Trips to the city remind her how much she enjoys living in the bush.  I wonder what she’ll think … actually, I wonder what we’ll think about the tent and blow-up bed tomorrow night.